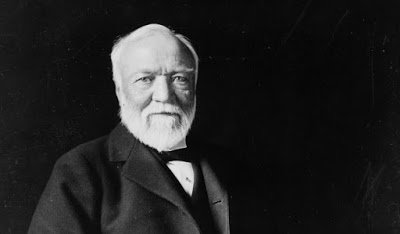 Good day to you! Having recently written about Dr. Wayne W. Dyer and how he was one of my mentors and a mentor to the world, the idea came to share some of my other mentors and express, at least in this small space, a bit of what they taught me and meant to me. Today, I will share some thoughts on Andrew Carnegie.

Other than some bits in high school history, I knew very little about Andrew Carnegie until 1989 when I learned of and bought a subscription series of business audiobooks. I was commuting a little over an hour each way to work and in four years of commuting, read 120 books on cassette tape. One was the abridged version of The Autobiography of Andrew Carnegie. Sometime later, I bought and read the book, but the tape did a fine job in 90 minutes of capturing the book.

You’ve probably heard of the book, Think and Grow Rich by Napoleon Hill. You may not remember, though it is stated in the preface, that this work was commissioned by Andrew Carnegie. Napoleon Hill met Andrew as a boy and they had a long mentoring relationship, and the grand outcome was one of the most read books in the entire world: Think and Grow Rich. Indeed, it is Andrew Carnegie’s methods throughout the book.

Andrew started life in the United States after leaving his home in Scotland. He was a young boy and his parents were seeking a better life. Arriving here, he was what you would call poor in finances, but rich in parental love and support. As a lad, he wanted to help, so he found work and continually improved his opportunities. He became a telegraph operator and excelled at it. He was put in positions in higher places and even had a conversation with President Abraham Lincoln in a telegraph office during the Civil War.

He eventually got into the business of making steel. The national railroad system was just beginning and making steel rails for the railroad was big business. As his business grew, he always took profits and invested them and saved money for future growth. Back in the late 19th century and very early 20th century, the country’s finances were a constant ebb and flow and recessions were frequent. During those down times, Carnegie would invest in new equipment, new steel furnaces, new mines for ore and coke, so that when the recession was over, his business was healthier than ever and more prepared than ever to expand and excel. In addition, he kept his workers busy doing these things where other companies laid theirs off. He was a very forward-thinking man.

He made more than a score of men millionaires during his rise in business. He became known as the world’s richest man. Charles M. Schwab was his right-hand man and helped convince Carnegie to sell his empire. A deal was brokered through J. P. Morgan and associates to buy Carnegie Steel for the sum of $400 million in 1901. That would be well over $10 billion today.

Carnegie had the idea that the first part of his life was creating a fortune and the second part was giving it all away. He set out on that path, and among the beneficiaries were 1,609 cities in the United States where he built a Carnegie Library. He was very big on education. In fact, he created 2,509 libraries around the world, and 1,609 were in the U.S. Can you imagine building and stocking so many libraries? This was only a small part of his philanthropy.

Andrew Carnegie was an amazing man and a giant legacy. I learned so much from him and that audiotape and from the first listen in 1989, I’ve listened several more times, and yet it is still with me. Indeed, it is part of me, he is part of me, and I am so grateful to have had and still have Andrew as a mentor.

[If you would like to learn more, get his autobiography, also Think and Grow Rich (1937 original edition), and another great one is Steel Titan, The Life of Charles M. Schwab by Robert Hessen.]

“Do Not Look For Approval Except For The Consciousness Of Doing Your Best.” — Andrew Carnegie

Spread Some Joy Today–by sharing your joy with others.