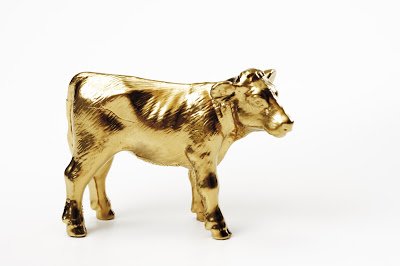 I think that we all have golden calves in our lives, and this has come home to me with the most recent pushing and shoving in personal choices of whose golden calf is the good calf and which is the bad calf.

In the Bible in the book of Exodus, which is a hair-raising story to read when fully conscious, there is the story of the Ten Commandments and later the development of the golden calf because the people were tired of waiting on Moses and they craved a symbol to see and so with the help of Aaron, their gold earrings and other things were gathered together and melted into a golden calf for their appeasement. Moses, when he finally came down from the mountain again, was truly upset with them because of what they chose to worship.

It’s an interesting story to read thousands of years later in the 21st century, and telling too. It really hasn’t changed much at all as I think about it. We are all still looking for things to worship and we are all choosing different things. Some are really important to us and others are semi-important until someone else takes a disliking to our choice, but in the end, we all have our golden calves and we are quite protective of them.

It doesn’t matter if it is a statue of a fallen General from the Civil War, the massive monument to the President who freed the slaves in dealing with that Civil War, a cross on the top of a church steeple, the flag of the United States of America or any other flag, the golden arches of commerce, the New York Times Bestseller List, the bull on Wall Street, and, well, this list is pretty much endless.

We have the so-called hate groups, and then we have the haters of the hate groups. How can we tell them apart? They are both in hating. They are separated by police in some cases and attacking police in another. We have the never-ending symbol of war, leading up to a war, fighting a war, cleaning up after a war. We have wars on people in other countries, and on drugs, the cartels, cancer, street-gangs, social climbers. We hold right as might and that evil needs to be eradicated. The righteous and the unrighteous. The worthy and the unworthy. The good, the bad, and the ugly.

Back to Moses. They made the golden calf because they felt the separation of each other. They wanted something to bring them together. Since all they have known was that this came from outside, so outside is where they built the golden calf. To say that these people were wrong because Moses thinks they are is not the best point. The larger issue is that Moses felt the separation and so he looked upon the Lord of the external in much the same way. Guide us, oh Lord. Lead us!

As we allow ourselves to think we are separate from our God, our Source, Source Energy, All-That-Is, we are in separation. We want so badly to be whole, yet all we can see is partialness. All we can see and feel is the separation because that is what we are looking at. We are looking at the ends of the stick instead of the stick itself. As we look at the negative, we see more negative. As we look toward the positive, we see more positive, and yet these are only partial views. We will find wholeness in impartiality as we realize that we are not standing on the stick looking to one side or the other, but we are the stick. As we see the negative, we see that it is us. As we see the positive, it is us.

In whatever way we choose separation, we see more separation. As we will have the courage and wisdom to know ourselves and all other living things as wholly, we see the oneness of the Divine. It’s not about religion, spirituality, or any other name. It is about tuning into what we truly are within and seeing all that we see as the same. We are all Divine. We are all of the same exact Source. We are all on this time-space adventure together. And, as individual creations, we all have the individual power of choice. It matters not so much what others do, but it matters 100% what we choose to see, feel, and sense.

We Are, Each And Everyone, The Chosen Ones.

Spread Some Joy Today–by challenging yourself to see yourself in those you do not like. See that we are all worthy of love, and in fact, in our depth, that is all we are: Love.