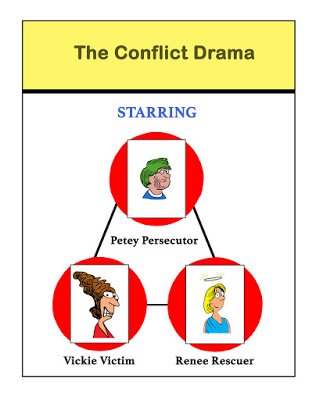 When many of us were young, we learned very well that being at fault meant punishment of some kind, and that caused the pain of one kind or another. So, it became foolish to accept responsibility for something even when we were asked directly about it. It became acceptable, and may I even say, desirable to lie about it regardless of how we felt inside or whether we thought they believed us or not. It was like a basic survival learning experience of the law of cause and effect. We knew what the effect as if we were the cause.

Somehow we missed learning the real law of cause and effect and so many of us have carried this basic survival learning into adulthood; albeit, less blatantly. Blame is still easier and safer we think. But is it?

A long time ago I learned about a psychological game that makes this basic survival experience so clear to me. I see it so easily in others and then I also have learned to see it in myself and then stop and get a better handle on my thinking and actions. Here is the game:

Draw a triangle and at one point write the word Persecutor, at the next point (either one), write the word Victim, and at the last point, write the word Rescuer. Now, once you get a handle on this game, you may see it being played by a number of people including relatives. It’s pretty logical. First, someone is playing the Victim portion of the game. They need a Persecutor to blame for their problems for it would be impossible in this game to accept responsibility for any of their actions. Then, there is someone who is playing the Rescuer part. They are trying to point out things that can be done to alleviate the problem, move forward, etc., but the Victim will never, ever listen seriously to a Rescuer; however, they really need them in this game. If the other two are not always in the game, there is nothing for the Victim, or the Persecutor, or the Rescuer.

For much of my life, I was a Rescuer. I call it ‘swimming upstream.’ It is never effective in the game because no one really wants to be rescued. Logic would dictate they want to be rescued, but really, they love playing the part. They’ve grown accustomed to it. It has its rewards in sympathy and the attention that comes from that.

There’s only one way out. Step away from the game. There’s only one way to step away from the game: Begin accepting responsibility for your thinking and your actions. People will still be playing the Persecutor with you, but you won’t be jumping in playing the Victim or Rescuer, so you’re on the outside looking in. When you are there, it is pretty clear that it’s a game. Otherwise, you will always be the game’s Victim. (Here’s a link to see more about the Karpman Drama Triangle.)

I Create My Own Reality!

Spread Some Joy Today–See if you see anyone playing the triangle game. . . Smile that you know the way out.