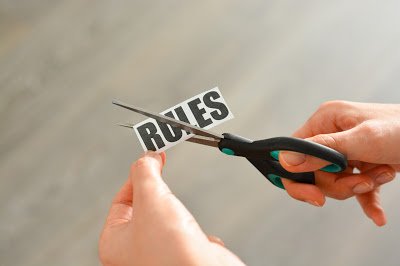 Posted on July 29, 2017May 10, 2020 by Terry Minion
“No rules exist, and examples are simply lifesavers answering the
appeals of rules making vain attempts to exist.”


“We started off trying to set up a small anarchist community,
but people wouldn’t obey the rules.”


“No tendency is quite so strong in human nature
as the desire to lay down rules of conduct for other people.”

How many do you break? How often? Who cares?
Breaking a rule and not getting caught–is that like the sound of the tree in the forest when no one is there to hear it? Heck, I break the speed limit rules virtually every day of my life to one degree or five or six. You know, the safe zone. I’ve broken so many rules throughout my entire life that it would be scary to list them all.
Who cares? I know I don’t care much. I suppose if I did, I would be more careful to not break them. Who made the rules, anyway? What is the meaning of all that?
The rules I break more often than any other rules are the most predominate rules on the planet: those made for my conduct by other people. I mean, really! What’s with that!? Heck, I usually break those on purpose! It’s like they deserve to be broken. Know what I mean? Where do they get off directing my conduct or thought?
So, my philosophy is that rules are a fluid concept. Maybe yes, maybe not. It depends.
Most Rules Are Meant To Be Flogged And Abused.
Spread Some Joy Today–Do you have any rules holding you back. How about any rules of your conduct written by others for your benefit? Laughable, right? Make your own rules. Heck, don’t have any rules.