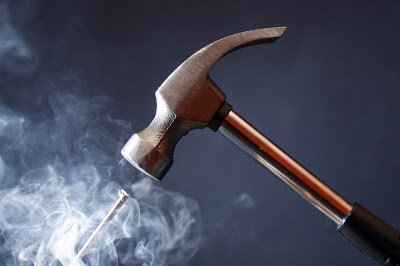 It’s interesting to watch how a thought becomes a belief, which is really only a thought that we think over and over again, or that we’ve accepted as truth to us, those beliefs that others have expressed, and often live by. Nothing new here. This is how parents are such an influence on their children–or at least, they can be that.

Thoughts are powerful things. Mike Dooley likes to say that, “thoughts become things." Well, true enough, but they become even more than things really. But, there is more to the story of the power of thought or even a belief. The other part of the story is what we feel.

A thought could be seen as a sturdy nail–sharp point and all. It can be a powerful thing. What we feel, or our emotion about and surrounding that thought would then be the hammer that can really drive that point home. Thoughts are energy, and emotion, or how we feel about that thought energy becomes that driving force that can turn that little spark of energy into a full-blown lightning storm.

And, here’s a valuable point in this. All of this is malleable. None of it is permanent or fixed. It can look really, really strong and could withstand anything, and then fall like a boulder off a cliff. It may work for a while, and then it can turn from valuable to worthless based on our surroundings, interactions, new knowledge, and a number of influences that can lead us to change, by changing our thoughts, and/or changing our feelings about those thoughts.

I like to look at these thoughts, beliefs, and feelings as all temporary. It may stick around for a time, but it could just as easily be gone in a flash.

Last night, I watched a movie that was just released on DVD, starring Sally Field, titled, Hello, My Name Is Doris. If you haven’t seen it, Doris is what used to be considered an ‘old maid.’ She is obviously in her 60’s and never married because she couldn’t stand the idea of leaving her momma. She took care of her momma all the way through her momma’s death, and she was just the same as her momma. Her momma was a hoarder and the house was a disaster. Doris worked in an office in the city, became infatuated with a young supervisor. He was the influence that helped mold some new thoughts and beliefs. Doris’s brother was concerned and wanted to help, and finally, Doris let it go. She let the stuff go because she changed her thinking, and that change in her thinking led to a renewed life without that lifetime of baggage she was carrying, physically and emotionally. That was a major change to take place.

There is a lot going on in our lives all the time. Whether that seems normal or not doesn’t matter. It is still going on, though it may be the same or similar things over and over. It’s not what happens to us, but how we feel about it. As something is happening, we are having thoughts about it and those thoughts are creating emotion. It is the emotion that gives the thought power.

Some ask, does the thought come first and then the emotion, or the other way around, or both at the same time? It is all of that, but in the mean, it is the emotion, or how we feel that drives us. If it is a negative emotion, in that it doesn’t feel good, we have the power to soften that, to soothe that with a different thought, creating a softer feeling. As we continue with that process, we can go from feeling crappy to creative, from despondent to delighted. Of course, it also works backward. We can go from enlightened to disillusioned, loving to fearful. We always get to choose when we realize that we have that option. We always have and always will have it, but sometimes our beliefs can convince us that everything happens to us, not by us.

Watching thoughts in action in others and in myself, these last few days has re-energized the idea that we are always in control of what we choose to think and how we choose to feel. The emotion is pretty much automatic unless we take hold of the idea that we are in control. Hovering above and watching our own thoughts and feelings in action is a perfect way to see that we have control and to exercise more of that control. We can see how and why we were feeling crappy, and we can see how and why we are feeling elated. Then we can make choices that cause us to have and to be and to feel more like we would really like to.

That Is Our Ultimate Power In This Life. We All Have It Equally.

Spread Some Joy Today–by exercising your power to feel and spread joy today.