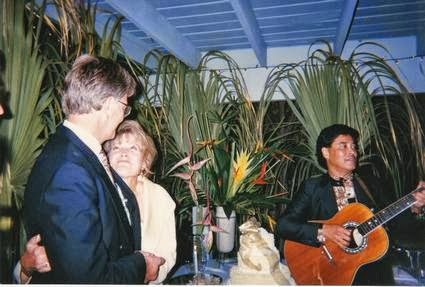 
But I love you less today,


less than I will tomorrow.”

I was a bit stuck on memory lane yesterday afternoon and evening and watched a couple of movies on the Internet connection. As I was surfing for something that I wanted to watch, I saw Elvis Presley’s Blue Hawaii. So, I watched it. It certainly isn’t the cream of the crop as movies go, but entertaining enough. Yet, it was way more to me.

I told the story of how I met my late wife, Nancy, in Hawaii, so that was a connection certainly. I think I also told the story of our wedding with the Hawaiian theme and flowers flown in from Hawaii that day, and that a dear friend brought a musician who played my own guitar and sang the Hawaiian Love Song to us. Here’s a photo of that moment.

It was a sucker bet that I would have tears flowing while the Hawaiian Wedding Song was playing on the movie, but the song that I woke up with in my head this morning was the one quoted above. It’s such a beautiful song, and the lyrics are equally so. I’ll probably have it going in my head all day long. Does that ever happen to you? You just hear a song or remember a song and then it is on constant replay all day long. In this case, that is a good thing.

But, this movie was somewhat more than memories of Nancy. It was memories of my late mother too. My mother was a HUGE Elvis Presley fan. In the fifties, she saw Elvis at the Pan-Pacific Auditorium in Los Angeles. I was too young to go, but I heard plenty about it with that dreamy look on her face. My mother found a way to buy every album that Elvis came out with, which ended up being quite a collection! She played them over and over and over again. I loved them too.

I was about 12-years old when Blue Hawaii came out in 1961, my mother took me to see it with her. The theater was very crowded, and we arrived late, so I ended up sitting behind her and watched her swoon through the whole film. We have both seen every Elvis movie and many of the filmed concerts. I’m almost done, I promise. . .

Then when I was about 25, and I think it was 1974, I wanted to give my mother a special gift by getting tickets and taking her on Mother’s Day to Del Webb’s Sahara Tahoe in Lake Tahoe NV to see Elvis in concert. It was the second time for mom, but my first to see him in person and it was spectacular. I will never forget that moving experience, and it was the best Mother’s Day present.

As I skipped lovingly down memory lane, I enjoyed every moment.

Ku-u-i-po, I Love You More Today, More Today Than Yesterday. . .

Spread Some Joy Today–That was some of my joy. Now go spread yours!