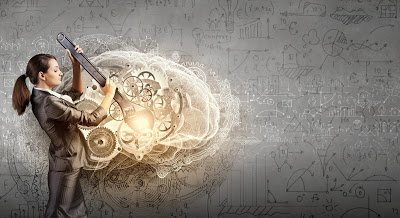 James Allen takes that most interesting thing in the environment and expresses how that environment comes about: “He thinks in secret, and it comes to pass: environment is his looking glass.”

I’ve come to believe that there are essentially two ways to see life: One, is that we are here on a ride that someone or something else created for us and it is totally up to us to figure that out and make the best of it. And, two, we are here creating our own environment with the power of our mind; albeit, we may not always be aware of the power that we ultimately control. I have come to know life as the latter, and the more I know about that, the more interesting the whole of it becomes. In fact, I’ve come to a point in my expansion of having a whole bunch of fun with my environment and my controlling of it or rather learning the allowing of it.

I found one of James Allen’s quotes particularly interesting because we often think of hard work and sacrifice as a way through to our objectives, and the bigger the objective, the more sacrifice is required. I especially enjoyed his idea of what that sacrifice is: “There can be no progress nor achievement without sacrifice, and a man’s worldly success will be by the measure that he sacrifices his confused animal thoughts, and fixes his mind on the development of his plans, and the strengthening of his resolution and self-reliance.”

As he says, “there can be no progress nor achievement without sacrifice.” That is what so many of us have been taught, but we were often led astray in what kind of sacrifice that would be. There was a long list of what kinds of sacrifices we might be obliged to entertain and execute for the privilege of gaining the goal. “and a man’s worldly success will be by the measure that he sacrifices. . .” Same old, same old.

The next part is the most interesting: “his confused animal thoughts.” Let’s just call that in a more modern way, the ego, paying attention to what-is, reacting to all that is already around us, dealing with problems, drama. Of course it is confused. That is easy enough to see by simply standing back for a bit and watching others. The same kind of things keep happening over and over because the “animal thoughts” are in control.

Next is where some clarity enters: “and fixes his mind on the development of his plans.” Focusing on what we want as opposed to accepting what is. Fixing our mind on what we want is the guiding star of all of life. It is the change-maker. It is where all progress and expansion are created. It is the real stuff of a purposeful and joyous life.

And, the last bit, “and the strengthening of his resolution and self-reliance.” Practice. We get better by doing and by adjusting as we move forward toward our desires. Practice helps enhance our resolution to stay on the path. Self-reliance is our enhanced inner confidence and competence, along with accepting responsibility for our own thoughts, actions, and results on the path of our desires.

The part that jumped out at me was that the sacrifice isn’t having to let go of something we want, but letting go of some of our self-defeating thinking that often keeps us where we are even though we can feel that where we are is not really where we would like to be.

Of course, if where we are is where we want to be, we have already arrived.

If It Is Not, There Are Sacrifices To Be Made. (Joyous Ones!)

Spread Some Joy Today–by letting go of holding on to what is not joy for you.