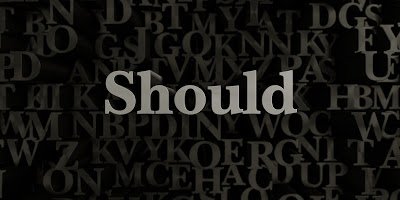 Posted on April 2, 2017May 10, 2020 by Terry Minion
“When you give
the credit or the blame
to another
for your success
or lack of it–
you are powerless
to make any change.”
— Abraham, Esther Hicks

In the middle of the night last night I awoke to the idea of how powerful the word ‘should’ and ‘shouldn’t’ can be in our lives. Then again early this morning as I was about to get out of bed, I was reminded of this again. Obviously, I intended to write on that subject.

I think that a lot of people, maybe even a majority, have the word should in their lives, and it is not only not serving them but is helping defeat them by giving them pointless feedback either before something, and even worse, after the fact.

I looked should up in the dictionary and find that it is the past tense of shall. I had no idea, but it makes sense. Shall is a plan, or an intention, or an expectation depending on how it is used. Should indicates a must, or ought to indicate duty, propriety, or expediency. You should do this, or you shouldn’t do that.

It occurs to me that whether it is should’ve or shouldn’t have, it is exactly the same. While it seems that one is positive and the other is negative because of the word, ‘not’ they work exactly the same.

Most often it is already done, so no matter what is said of it from whatever perspective, it matters not. It is done. It is history. At the same time, it is about the future. It cannot be modified in the past, nor can it be modified in the future. We are powerless to change, as Abraham points out because we are either giving the credit to others because they are smarter, better, wiser, or we are blaming them for our ills and worse, blaming ourselves for our ills.

Words have power. We might fling them about as if they are light as a feather and yet they can do great harm. Here’s a consideration for our growing health and well-being: delete the word should and all its forms from our vocabulary.

What is better? I think it is accepting responsibility for our choices, and our results whatever they may be, then allowing others to accept or reject responsibility as they choose for themselves. The only person I have any control over is me. The only way I can truly influence another is as the true me that I become and grow closer to full alignment with.

As I criticize another by using the word should, and as I criticize myself using that word and all its forms, I see a false world, or rather a reality that I do not really want. As I change my mind about all of that, finding things to praise instead of criticizing, I come into ever-closer alignment with my higher power and true self.

Should Lives In The Past And Future. I Live In The Present.

Spread Some Joy Today–by looking for what you want to see, and those things that you don’t want to see or experience will not be seen. Should attracts more should’s. Appreciation attracts more to appreciate.