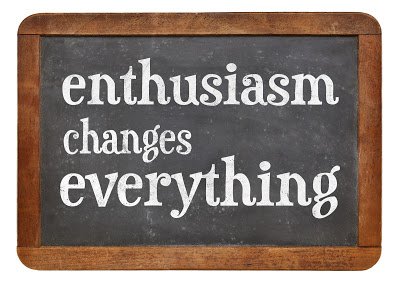 Posted on March 1, 2017May 10, 2020 by Terry Minion
“I consider my ability
to arouse enthusiasm among men
the greatest asset I possess.
The way to develop
the best that is in a man
is by appreciation and encouragement.”

[Continuing re-sharing some classic posts that relate to enthusiasm, its meaning and its value in our lives. This post is from 5-4-14]

Enthusiasm is such an interesting experience. With it, a situation is created in which previously constricting barriers are broken and new, never before thought possible accomplishments are made with relative ease. One might look at it as rather than gaining or wielding a power, it may be more of a releasing of resistance, or developing a new or renewed state of mind.

In my study of the steel magnate, Andrew Carnegie, I learned of Charles Schwab, who went from day laborer to becoming a partner with Carnegie, to arranging an extraordinary buyout of Carnegie, to the president of the largest steel company in the world, United States Steel. There is a rare and fascinating book about Charles Schwab by Robert Hessen, titled, Steel Titan.

In the book, there are numerous examples of Schwab’s ability to arouse enthusiasm with others. Here’s a quote from one of them:

“. . . many of the veteran Bethlehem executives preferred the old, pre-Taylor and pre-Schwab way of doing things. They resented Schwab; he was an intruder. One man went so far as to say that Schwab was crazy and that his production goals were fantastic. Schwab singled out that man. He told him as Ward recalled, “If we can get our blast furnace operation to such and such a state of efficiency, I’ll pay off the mortgage on your house.” The skeptic fell into line, pushed himself and his subordinates to reach the goal which he has said was unattainable, and, in a matter of months, found himself with a mortgage-free house.”

There are many examples of very similar challenges to the concept of what can and cannot be done by Henry Ford. One memorable example was his demand to design and build the very first V-8 engine, which all of his engineers said was impossible. We all know how that turned out.

Enthusiasm has a way of connecting us with powers we didn’t realize that we had available to us. In fact, the origin of the word indicates a possession by a god, of having a god within, and later synonymous with states such as passion, eagerness, zeal, devotion. I love the deity reference because I think it is like aligning ourselves with God or accessing the ultimate power of the universe.

Frank Bettger, who wrote several books with his most famous one titled, How I Raised Myself From Failure To Success In Selling, coined the phrase, “to become enthusiastic, act enthusiastically.” I could write a book about that phrase and all the related ideas that it entertains, but the key ingredient is that we need not wait around for enthusiasm to come to us. We have the power to create it, and Frank Bettger so eloquently and succinctly shared it with the world.

As a leader, Charles M. Schwab shared his number one asset as his ability to arouse enthusiasm in others. We all know leaders with this asset. He also showed, along with Frank Bettger and many others, how powerful enthusiasm can be to change our lives for the better.

I Wish Enthusiasm For You! It IS Being Divinely Inspired.