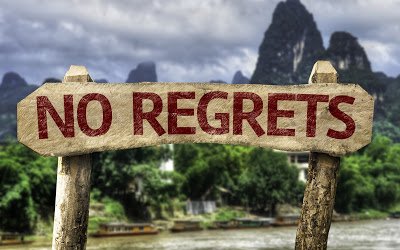 Yesterday, I mentioned Australian author Bronnie Ware and quoted from her latest book; however, the book that put her high in popularity as a writer was her book, The Top Five Regrets of the Dying. For many years she worked with people in the last stages of their lives and became intimate with them and gathered their wisdom in reflecting on their lives. Some of this was regrets. Regret number one was, “I wish I’d had the courage to live a life true to myself, not the life others expected of me.”  Bronnie states that she heard this same theme with so many of those she cared for and have come to the end of their life, finding that they had the ability to choose differently, and failed to exercise that authority. They went with the training they had received young in life and followed the edicts of those moralistic idealists who claimed they knew the right way to live a life. Wayne Dyer said in his book, Your Sacred Self, “We’ve been taught to look outside ourselves for sustenance–to look beyond the self for power, love, prosperity, health, happiness and spiritual fulfillment. We’ve been conditioned to believe we get life’s bounty from somewhere outside of ourselves. But it’s possible to reverse our gaze from outward to inward. And when we do, we find an energy we’ve sensed but not previously identified.”  He goes on to say, “There dwells within all human beings a driving energy. He said that it comes in two parts. One sort of runs the hardware of our beating heart, breath and so on, and the other is the far more vast inner universe. He says that, “when the divine light within you is experienced directly, it adds a radiance to life unlike anything that can be described with words or pictures. When you discover your sacred self, you awaken this dormant inner energy and let it guide your life. The word most commonly used to describe this inner force is “spiritual.”  Several days ago, I wrote about accepting versus choosing. In this case, accepting a life that is dictated by others or choosing to live according to your own heart and mind. There’s no need to accept, but if that be the case, it is in reality a choosing, for we always have the choice to follow our heart or follow what others think is best for us. That statement, “I wish I’d had the courage to live a life true to myself,” says it all. Courage and change is a choice as is accepting our lot in life. Why regret? Why be disappointed? Do it now! Life is short, and sometimes much shorter than we might have imagined. I am now imagining myself at death’s door and checking on any regrets, and I see none. If a young person was nearby and I was giving my worldly advice, I would say, for them to follow their bliss, or their heart, and enjoy themselves to the fullest whatever they are doing and wherever they find themselves, that it is their life and their own choice how to live it. Be True To Yourself. It Is YOUR Life.  Spread Some Joy Today–by following your own joys.