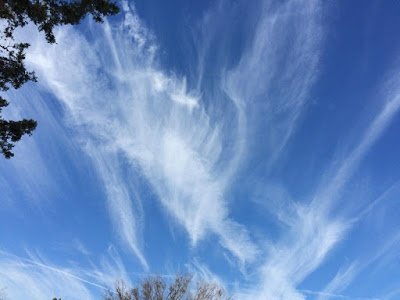 I don’t know about your area of the country or the world, but around here, and for some years now, the grocery stores, banks, and other businesses that we may go to often are trying hard to develop a relationship with us as customers, not by actually developing a relationship, but by asking insincere questions. Some of them are, “so what are your plans for the rest of the day?” at the grocery store, “how was your weekend?” at the bank, and other such dribble. It’s as if we really have the time to answer those sincerely and to get into a conversation and exchange something of value. I just want to slap the manager who went to the seminar where they said this was a good thing to do and then came back and gave it out as a task to the people on the front line. Complete silliness.

Yesterday I went to the bank and one girl had been on vacation for a couple of weeks, and I said, “welcome back! I hope you had a great time!” So she says, “Thank you, I did.” Then she said, “has anything exciting been going on with you?” I didn’t know how to answer that question because I don’t think she would understand, so I said, “Not really.” Then she said, “just same old, same old, huh?” I said, “No. Have you seen the sky today?” And we were done.

The truth for me is that every minute of every day I have been experiencing life as if I was free to enjoy it all in a special way. I’m in awe of the sky some days. Yesterday was one of those days. It was the most magnificent display of wispy, curly, high white clouds against a blue background. The air was moving slowly. The temperature was like an early Spring. My pace was leisurely. I was enjoying everything around me including traffic with all sorts of people driving all manner of moving vehicles, going wherever they were going. I was thankful that I had money to deposit, and money to withdraw, I enjoyed watching Charlie on the seat sticking his head out of the window smelling the air, then later having him take me for a short walk. 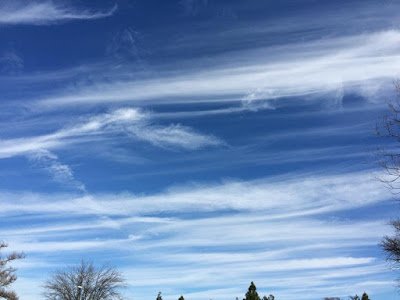 My step-daughter, whom I haven’t seen in two years, came to stay for a little over a week. She whipped my place into shape, adding new plants, doing many chores around the place all because she wanted to. I was fine with the way it was, but I was also fine with the way she put things in their place, added a woman’s touch long missing from this place, teaching me how to grind coffee correctly with my coffee grinder. I thought I knew how, but I was in an illusion of skill. She had just left yesterday morning, so I was enjoying looking around at all that demonstrated she had passed through.

We got a new client that took many months to come about and my business partner was doing the first interview to get their service going. I was appreciating him and all that he brings to our business. In fact, it really is his business now.

Though we would love to have more rain, the weather for the last week has been in the mid-seventies to the low eighties. Everything is green because we did receive a good deal of rain in the last couple of months. It feels like a rebirth. Hearing lawn mowers going, weed whackers whacking, is an indication of growth. One day last week I didn’t go anywhere and pretty much didn’t do anything except be home with windows and doors open and just soak in the delight of the weather, the sunny skies, the birds chirping, and so much more.

Has anything exciting been going on with me? Abso-fricken-lutely! And I gave you the short version. Same old, same old? Absolutely not. Everything was new, different, delightful, and I was in joy the entire time. Small talk is small. Stupid questions are stupid. If we are really interested in connecting with each other, let us ask better questions, and leave space for the real answer, or leave them out entirely.


Anything Exciting Going On? How About Being In Awe Every Single Day!

Spread Some Joy Today–I will as soon as I find it. Hmmm. Where is that joy? I know it is around here somewhere. . . Oh! There it is! It’s inside. Right where I left it.