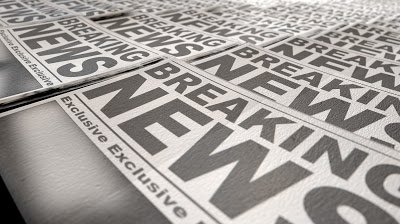 We partially manage somewhere around 140 facebook pages and profiles for our clients, and I guess you could say that I am the overseer of all of that, so you would think that I spend a lot of time on facebook. That would be logical. I probably average less than a half hour on average. Many days way less than that.

We also ‘manage’ around 85 twitter accounts. But I spend about one fourth the time there than on facebook. Same with linkedin.

I take the daily newspaper here in glorious Fairfield, California and I spend about 3 minutes looking at that, mainly for any articles or ads of our local clients.

I haven’t watched network television for many years. I long ago shut off the cable. I see no TV shows and zero news shows. I do like movies, so watch them.

I don’t surf the web for news. Well that is a funny word–news. When they (they being the people who produce it) talk about news it is so biased toward the negative things and events in the world that one might as well add the word negative or bad to the word news: I’m Paul Trevor with the bad news of the day! Here’s the top stories. . .

I used to pay attention to all that shit. And, yes, it is shit. It never helped me in the slightest except to be able to converse with someone else about how bad things have gotten and what in the world are they going to do about it, and on, and on, and on. It’s all a self-defeating prophecy. And every bit of it is fear.

Yes, I have become ignorant. I’m delightfully ignorant. Look at the first five letters of that word, then add an ‘e.’ Yes, I ignore it. I am ignorant of it. I did not hear about it, do not want to discuss it with anyone including my own thoughts. I do not want to see it over and over and analyzed to death on the network. It is poison that I took on purpose. But, I changed my mind and chose to live, so I let it all go. I am now blissfully ignorant of the bad news of the world.

Now, I look for the good news of the world. I look for the inspiration. I look for the making something out of nothing and benefiting hundreds, thousands, millions stories. I look for it locally. I look for it regionally, and globally. It used to hide from me because I was so drawn in to the bad news that the world was rather dark, but now I see that is not true. The world is rather bright and growing brighter every single moment.

This is now the world I live in. It is my reality. It is the world I created, and it is real.

To Infinity And Beyond!

Spread Some Joy Today–because it begins inside of us, and sharing it is purely natural.