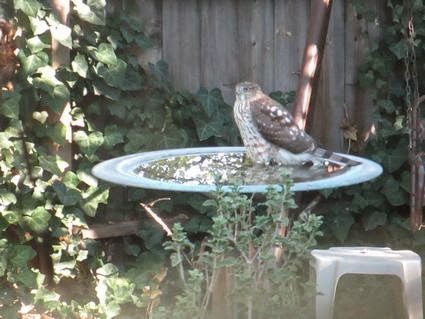 Posted on November 6, 2014May 10, 2020 by Terry Minion
“What people call serendipity
sometimes is just having your eyes open.”

I’ve probably taken at least 50,000 photos, but from a photographers point of view, I’m not one. That’s why they separate amateurs from professionals. There is probably something more to it than that, but I don’t really care.

It’s more about opportunities than skill much of the time to catch a glimpse of something special. In the last year or so, I’ve caught two that stand out to me. Just for the fun of it, I’ll share them with you. 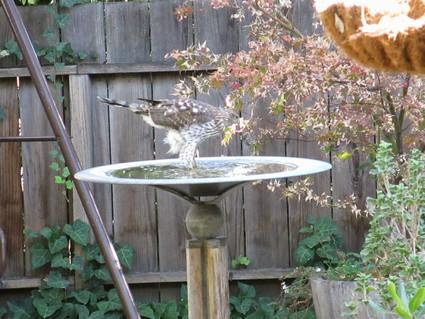 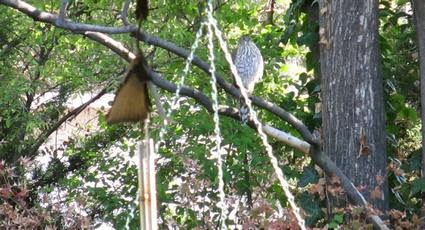 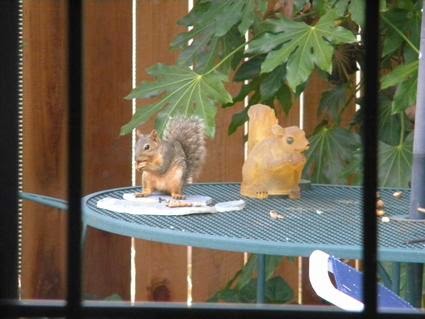 The photos of the hawk above are in the birdbath outside my office (which used to be a garage when the house was first built). I have a 7′ sliding glass door to view the courtyard and get to see a lot of different birds drinking and taking a bath. Most of the time, they are common residents like Robins, Blue Jays, Finches and so on, with periodic visitors like Cedar Waxwings. But, never a hawk. In fact, in 29 years here, I’ve only ever seen one overhead, but never in the yard, and especially not in the birdbath that is way too shallow for such a big bird.

Then, yesterday on the 5th of November, 2014, I was talking with my business partner on the phone and I looked out at the courtyard and there was this hawk sitting in the water. He or she sat there for the longest time allowing me to use two different cameras and even shoot some video. Finally it took a bath went up into the nearby tree and preened a bit and was on its way.

According to my bird book, this was an immature Cooper’s Hawk. At first I thought it was an American Kestrel. What a beautiful and at the same time, serious-looking bird.

The squirrel. This was also strange. Nancy bought this yellow squirrel solar night light. It would light up at night which looked odd. We had it for several years. Never saw a squirrel in our yard, and then one day we saw one eating some of the bird seed. We put out some peanuts and other nuts and it came around more. Then months later, there were two. We would put nuts on the deck table and the squirrel would get up there and eat them or run off with them.

One day I decided to put the solar squirrel on the table in hopes that I might have the unique opportunity to catch them side by side. It came to pass. I didn’t have much time, but got some quick shots and this is the best of the lot where they are sitting at opposite angles, eating in the same way. I couldn’t believe my luck, but I know it isn’t luck at all.

Be careful what you intend (we used to say ‘wish for’), as it may very well come true!

Spread Some Joy Today–by choosing to make it a perfect day. No matter the weather, no matter the circumstance, no matter what. No one can choose except you.