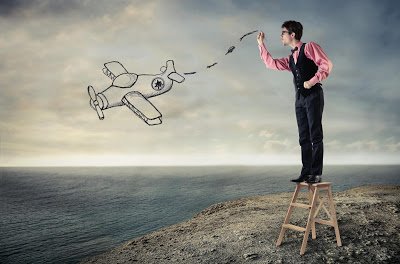 Posted on November 27, 2017May 10, 2020 by Terry Minion
“The problems of the world cannot possibly be solved by skeptics
or cynics whose horizons are limited by obvious realities.
We need men and women who can dream of things that never were.”

“The only way to discover the limits of the possible
is to go beyond them into the impossible.”

Ever had anyone laugh at your ideas or thoughts? Anyone ever put them down and say what a dreamer you are, or how foolish you are to think that? Anyone ever remind you that you should focus on reality instead of playing around in a fantasy world? Anyone ever say you were crazy and couldn’t possibly succeed at something? If so, then you can totally relate to JFK’s quote about skeptics or cynics whose horizons are limited by obvious realities. I especially love the phrase obvious realities. If you are a realist, is there any other kind? Perhaps hidden realities, secret realities, unreal realities?

Anyone ask you why in the world you would want to do such a thing? George Bernard Shaw says a great question to ask back is why not? Who says you have to have a reason? That would be for the reality people. The unrealistic among us have no need for such trivial pursuits as reason or even logic. Philosophy is helpful, but mathematics is not necessary. We can pull numbers right out of thin air. That is where they prefer to float, you know.

Then, our fictional scientist, Arthur C Clark claims that there is only one way to find the limits and that is to exceed them. Rules are meant to be broken? If you can go there in your mind, who needs a spaceship? The state of possible is just beyond the border of impossible, or was it the other way around?

One thing is for sure and certain, I have learned to ignore all of these commentaries from the critical mass of the skeptic and cynics whose horizons are limited by obvious realities. The land of impossible is in a galaxy far, far away. I think why is on third base or was that when? A little aging humor.

You are cleared to move about the cabin. . .

It’s Obvious To Me That We Can Do Anything We Can Think Up. Why Not?

Spread Some Joy Today–Go do something strange and fun this week. Take a long lunch and go see a movie in the middle of the day, or some other unusual thing. It will be fun and exciting and will give you such a boost. Go ahead. Take a chance.